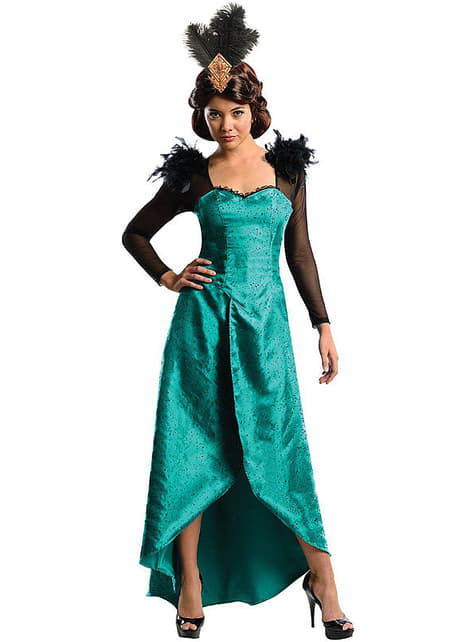 Deluxe Evanora The Fantasy World of Oz costume for a woman

You will be the overprotective sister of Theodora, and have a penetrating look that everybody fears with this Deluxe Evanora The Fantasy World of Oz costume for a woman.

'The Fantasy World of Oz’, directed by Sam Raimi, recreates the origins of the Wizard of Oz, the popular character from Frank Baum. Oscar Diggs (James Franco), a small-time and disreputable circus magician, is thrown from the dusty Kansas to the gleaming country of Oz. He is convinced that he has won the jackpot, and that fame and fortune are at his fingertips. But things change when he meets three witches: Theodora (Mila Kunis), Evanora (Rachel Weisz) and Glinda (Michelle Williams), who are not convinced that Oscar is the great wizard who everyone was waiting for. To his chagrin, Oscar must face the enormous problems the country of Oz and its inhabitants have, and he will have to discover who is on his side and who his enemies are before it is too late. Using his magic games with wit, imagination and some witchcraft, Oscar not only will transform into the great and powerful Wizard of Oz but also a better man.

This impressive Evanora costume includes a beautiful, long, green dress, with tulle sleeves in black, and feathers at the shoulders. It also includes a magnificent headband with black feathers.

Upload your photos to Instagram with the hashtag #funidelia followed by #funidelia05149.