You’ll scare both children and adults with this Classic Freddy Krueger costume for a man.

Freddy Krueger (Frederick Charles Krueger) is the main character of the horror saga A Nightmare on Elm Street. Freddy emerges in the nightmares of children and teenagers of Elm Street to kill them, because the acts committed have repercussions in real life. His physical appearance is very characteristic: a disfigured face and hat, a red and green striped jumper, and a glove of knives that he himself has made. In the movies he has a grotesque sense of humour. His appearance is usually accompanied by a song that girls sing while skipping.

This breathtaking Freddy Krueger costume includes his classic red and green striped shirt worn down at the edges, the glove of knives he created himself, the mask of his disfigured face after the flames that wiped out their house and ended his life, made of rubber EVA and the hat he always uses. 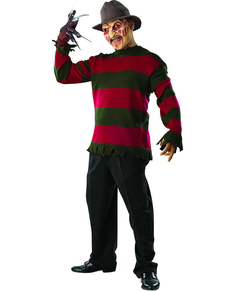 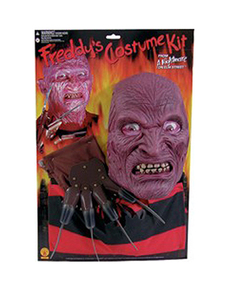 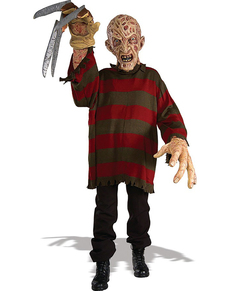 Upload your photos to Instagram with the hashtag #funidelia followed by #funidelia05299.