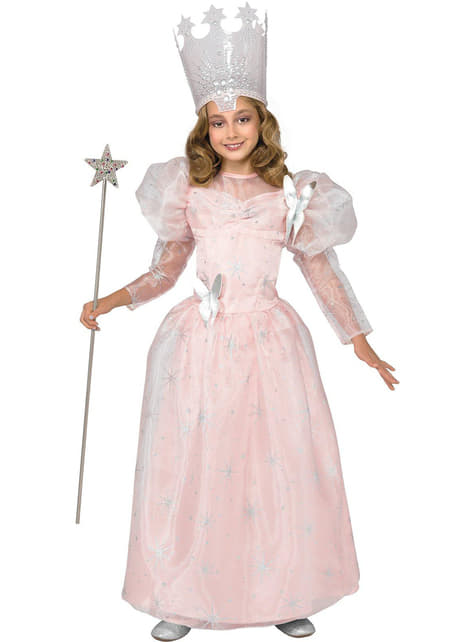 You’ll be the good witch, the personification of everything honest, generous and pure with this Glinda the Good Witch The Wizard of Oz costume for a girl.

The Wizard of Oz is a fantastic American musical film from 1939 produced by Metro-Goldwyn-Mayer, although Time Warner now own the film rights. It featured performances by Judy Garland, Frank Morgan, and Ray Bolger, among others. Today, it is considered a cult movie, despite its initial project as child fable film. The movie is based on the children’s novel by L. Frank Baum, the Wonderful Wizard of Oz, in which a young American is dragged away by a tornado in Kansas State and dropped off in a fantastic land inhabited by good and bad witches, a scarecrow that talks, a cowardly Lion, a tin man and other extraordinary beings.

This beautiful Glinda costume will make you feel like the kindest witch in the kingdom. Includes a long dress pink with silver stars, with tulle on the sleeves, chest and shoulders, and a beautiful silver crown with sparkles.

Upload your photos to Instagram with the hashtag #funidelia followed by #funidelia12311.

Product Rating: "Glinda the Good Witch The Wizard of Oz costume for a girl"
Sizes